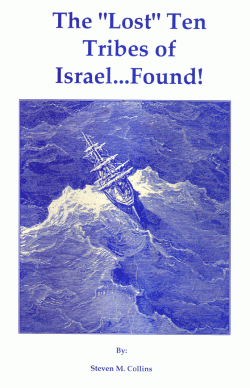 My first book, The “Lost” Ten Tribes of Israel…Found, has been out-of-print for a considerable period of time, and many people have asked for copies of it. Due to public demand, this book is now again available for purchase as an e-book, and it is being made available at half the price of the original printed book!

This is the same book as was originally published in a printed version, but it has been reformatted for computer screens, and made more readable with larger print size, wider margins, etc. Due to the reformatting, it is now 628 pages of well-documented information on the history of the ten tribes of Israel from the time of King David through the time of the Divided Kingdoms of Israel and Judah, the new empires and kingdoms founded by the tribes of Israel during their migrations and their locations among the modern nations! This book also includes much information about the presence of the Israelites in ancient North America as well as segments about the migrations and modern locations of the ancient Assyrians.

This two­book series sets forth, in a non­denominational manner, new evidence that the Holy Bible is exactly what it says it is: the self-proclaimed word of a Creator God. After reading them, instead of “having faith” in spite of the scientific and historical record, you will be able to believe in a Creator God because of the scientific and historical record.

Josephus, a prominent Jewish historian of the first century A.D.  commented on the immense population of the ten tribes of Israel in their new Asian homeland and even mentioned one of their national borders. So, eight centuries after their removal from Palestine, a Jewish historian did not regard the ten tribes as being “lost.” The ten tribes of Israel can easily be identified in the first century A.D., and their subsequent migrations can be traced in the records of secular history from that time into the modern era.

While some of this book’s material is derived from recently­ discovered information, the reader will be surprised to learn that portions of the material were known on both sides of the Atlantic Ocean during the last century. Indeed, a joint session of the U.S. Congress was even given some of this information in 1857! As the reader will also see, North America had a prominent role in the explorations and colonizations of the ten tribes of Israel during several periods of world history! In addition to verifying biblical accounts of world history, this book will shred the “politically correct” notion that Old World civilizations never colonized the New World prior to the time of Columbus. This book offers a brand­new, biblical view of world history, discussing nations, empires and events which (though well­ known to the Greeks and Romans) are ignored by today’s educational system.

As the reader will see, however, the Bible’s credibility and infallibility can be proven via God’s implementing his prophecies about the ten tribes of Israel throughout history. That God is implementing biblical prophecies in our modern world further demonstrates that God is still actively in control of world events in our time as well.

This book will also examine the life of Jesus Christ in light of new perspectives on world politics during his lifetime. As the reader will see, Jesus Christ (because he was of the royal seed of David) was actually a potential heir to the throne of a great empire in Asia which was primarily composed of the descendants of the ten tribes of Israel. The Magi (who paid homage to Jesus, and knew that he had been born “a king”) were members of the nobility of that empire, and were well aware of Jesus Christ’s royal blood.

This ancient Israelite empire and Rome were mortal enemies, but Jesus was born during a time of “detente” between these rivals. The Romans and Greeks preserved volumes of information about this great Asian empire, but its history has strangely been deleted from modern history textbooks. This book also offers intriguing answers for the mysterious eighteen­year gap in the Bible’s account of Jesus’ life; where did he go and what did he do between ages twelve and thirty? The answers will surprise you!

This book has been written in a manner intended to be both informative and interesting for the general public. However, scholars are also likely to review the material, and they are accustomed to seeing technical historical material presented in formats which the general public might regard as esoteric and hard to read. Therefore, in an attempt to satisfy both audiences, this book presents, discusses and documents the technical historical material, but it does so in “layman’s language” to appeal to a mass audience. Biblical quotations appear in the book’s narrative while secular historical sources are cited in an extensive set of endnotes accompanying each chapter. Since the conclusions of this book are rather revolutionary, care has been taken to buttress its conclusions with multiple sources of evidence. Therefore, in the event future scientific review alters the context or dating of a particular piece of evidence cited in this book, the book’s conclusions will not fail due to changed future conclusions about any single piece of evidence.  The reader will benefit most from this book if the chapters areread in numerical order because information and concepts needed to understand later chapters are presented in earlier chapters. This book begins at a time when God’s blessings of the combined tribes of Israel reached an apex in the ancient world: during the reigns of Kings David and Solomon. This book documents that the power and scope of the ancient United Kingdom of Israel was far greater than is generally acknowledged. You will likely marvel at how much information is available about the ten tribes of Israel in all historical periods. You may also come to wonder why such information (even though it is readily available) has been deleted from modern history textbooks.

The second book in the series will document that the Bible’s accounts of the earth’s prehistory and mankind’s presence on the earth are entirely compatible with the discoveries of modern science. It will also debunk the unscientific dogma of evolution, conclusively document that we are living in the biblical “latter days,” and even expose certain unbiblical Christian dogmas which have given the Bible its undeserved reputation as an unscientific book. It will also continue the theme of this first book, examining numerous prophecies about the role of the ten tribes of Israel in our modern world, offering possible scenarios for their fulfillment. The second book will conclude with an examination of how life on earth will change after the return of Jesus Christ, based on specific biblical prophecies and precedents. Both books will offer the reader a number of major surprises.

After reading these books, your views of the Bible, world history and the future will never again be the same.