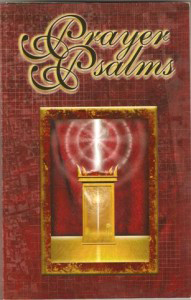 In the early 1970’s, after being filled with the Holy Spirit, Ephraim found the Psalms to be a wonderful source of inspiration, hope, encouragement, comfort, and exhortation for his newly found faith. He soon found out that the words of the Psalms were revealing his heart-felt needs and at the same time made known an Almighty Creator and Father, whose very nature fulfilled every aspect of those needs. Consequently, Ephraim began to pray the Psalms in first person singular. After discovering his Hebraic roots, he moved to Israel in 1978 and began to learn the Hebrew language. With the help of his native born Israeli wife Rimona, he learned that His Heavenly Father had many names and that each of those names fit man’s many complex needs. Ephraim incorporated those names as he was “praying the Psalms.” These prayers are now available to inspire and encourage many.

The words that were penned by King David revealed Ephraim’s own heart-felt needs and at the same time made known an Almighty Creator and Father, whose very nature fulfilled every aspect of those needs. Ephraim incorporated those names, as well as other Hebrew terms to the personalized Psalms, adding a depth of richness and meaning from the original language of Hebrew.  This volume, of all 150 Prayer Psalms, includes a CD of the book’s Glossary (which is the full list of the Hebrew terms, transliterated and translated).