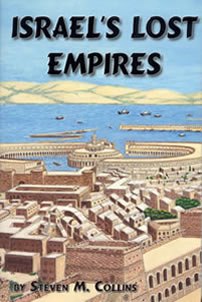 There is a common misconception that the ten tribes of Israel “disappeared” when they migrated into Asia. Nothing could be further from the truth! For many centuries, ancient historians knew both who the Israelites were, and where they went. They were not “lost” at all.

Consider one such example. Flavius Josephus was a Jewish military commander, a Pharisee, and an historian of the first century A.D. He wrote this about the ten tribes of Israel who were in Asia:

“…there are but two tribes in Asia and Europe subject to the Romans, while the ten tribes are beyond Euphrates till now, and are an immense multitude, and not to be estimated by numbers.”1 (Emphasis added)

Eight centuries after the ten tribes of Israel migrated to their new Asian homelands, Josephus knew that their population had become too numerous to estimate, and that the Euphrates River served as their western border.

Ezra 4:1 records that contingents of only three tribes (Judah, Levi and Benjamin) returned to Palestine in the time of Ezra and Nehemiah. They were the forebears of Judean Jews living in Judea at the time of Christ and Josephus. Judah, Levi and Benjamin were part of the former kingdom of Judah (II Chronicles 11:1, 14), not the kingdom of Israel (i.e. the ten tribes of Israel”). Josephus affirmed that while contingents of Jews lived in Palestine, the ten tribes of Israel stayed in Asia. This is important because it refutes the misconception that the ten tribes migrated back to Palestine and were included with the Jews at the time of Christ.

The Ten Tribes of Israel Become “the Scythians”

Josephus asserts that the ten tribes of Israel were still in Asia in the first century A.D. His comment that the ten tribes were an “immense multitude” indicates we should expect to find very large masses of Israelites in Asia in the first century A.D., not isolated little remnants. An inevitable result of nations having very large populations in the ancient world was the achievement of political and military power, and we will see that the Asian Israelites had attained such power long before the time of Christ. Josephus’ comment that the Israelites were “beyond Euphrates” tells us that the Asian Israelites were then located north and east of the Euphrates River. As the reader will see, it is not difficult to locate the Israelites in Asia.

The Bible contains promises concerning the Israelites that must be mentioned before the historical evidence is examined. A prophecy in Hosea 1:6-10, stated that although God would “utterly take away Israel [from Palestine],” He would, thereafter, make their population “as the sand of the sea, which cannot be measured or numbered.” This prophecy about an innumerable population for the ten tribes had been fulfilled by the time of Christ, as Josephus confirmed. This illustrates an important lesson: God always keeps His promises and fulfills His prophecies.

Also, the Bible promised that the descendants of Abraham, Isaac and Jacob (Israel) would perpetually be known by a particular name. Genesis 21:12 records God’s promise to Abraham that: “through Isaac shall your descendants be named.” (RSV)

God’s “covenant” blessings upon Abraham were inherited by Isaac and Jacob, whose name was changed to “Israel.” Genesis 48:14-20 shows that Jacob- Israel passed on these blessings to the tribes of Ephraim and Manasseh. Therefore, while the name of “Isaac” could generally apply to any of the Israelite tribes, the term would most specifically identify the descendants of the tribes of Ephraim and Manasseh. Therefore, we should look for the Israelites in Asia or elsewhere to be known by various forms of the word “Isaac.” As we shall see, secular history confirms that many large population groups in Asia did come to be known by variations of the name “Isaac.”

Chapter two discussed several waves of migrations into Asia by the ten tribes of Israel. The captivity of the Israelites who withstood a three-year Assyrian siege in Samaria is the most famous, but it is actually the least significant of the Asian migrations. Assyrian cuneiform records state that a mere 27,290 Israelite captives were taken from Samaria.2 The other two migrations involved far more people.

About twenty years before the fall of Samaria, the tribes of Gad, Naphtali, Reuben, and one-half the tribe of Manasseh were carried captive into Assyria (II Kings 15:29, I Chronicles 5:26). While the captives from Samaria represented only one city in the territory of the tribe of Ephraim, this earlier captivity involved the entire populations of at least three and one-half tribes. The Israelites taken in this captivity can be conservatively estimated in the hundreds of thousands. Also, as we learned in chapter two, many Israelites fled the final Assyrian invasion, voluntarily migrating into the region of the Black Sea and the Caucasus Mountains. Since this body of Israelites had a military escort of 220,000 soldiers as they migrated,3 it easily numbered over one million people.

Many inhabitants of Israel’s capital city, Samaria, were taken to the cities of the Medes (II Kings 17:6). We will begin our search by looking for a group of people who were not physically present in Media before the fall of Samaria. One historical account records that Assyria’s King Esarhaddon in 674 B.C. was confronted by an alliance of “Mannaean, Median, and newly-arrived Cimmerian forces.”4 (Emphasis added) The “newly-arrived” Cimmerians were the Israelite Samarians who had been settled among the Medes only a few decades earlier. Webster’s New World Dictionary states that “Cimmerian” is pronounced “Si-mer-e-en;”5 the consonants of “Samarian” and “Simereen” are a perfect match. That these “Cimmerians” were “recent arrivals” in Media adds weight to their identification as Israelite captives from the city of Samaria.

The Israelites who migrated to the Black Sea region became known as “Scythians.” The Encyclopedia Britannica records the Scythians as first being present in Eurasian locations in the seventh century B.C.6 The Encyclopedia Americana adds:

“The Scythians…are those tribes that occupied this territory [the region north of the Black Sea] from about 700 B.C.”7 (Emphasis added)

Another account of the Scythian arrival in the Black Sea region is found in The Scythians, by Tamara Talbot Rice, which states:

“The Scythians did not become a recognizable national entity…before the eighth century B.C…By the seventh century B.C. they had established themselves firmly in southern Russia… Assyrian documents place their appearance…on the shores of Lake Urmia [just south of Armenia] in the time of King Sargon (722-705 B.C) a date which closely corresponds with that of the establishment of the first group of Scythians in southern Russia.”8 (Emphasis added)

These accounts are all consistent with the historical records cited in chapter two that the Israelites migrated to the Black Sea area toward the end of the eighth century B.C. Rice’s account indicates the Black Sea Scythians arrived in southern Russia via a route that included territory south of Armenia in 722-705 B.C. That is exactly the time period the Israelites were migrating from their homeland, and it also indicates the Scythians originated in a former homeland south of Armenia. That place was Palestine, the location of the old kingdom of Israel.

Later in this chapter, we will see other Scythians came to live far to the east of the Black Sea Scythians. Tamara Rice’s book includes a map showing that the burial sites of these “related clans” of the Scythians have been found as far eastward as the Pazirik/Altai region where the old Soviet Union joined the western edges of China and Mongolia.9

The opening of a burial mound of these eastern Scythians was the subject of an article in the October, 1994 issue of National Geographic magazine. It had the following commentary:

“The Pazyryks thrived in these steppes…in the sixth through the second centuries B.C. They were horsemen …[and] shepherds…Dozens of such tribes rose on the steppes of Eurasia in this era, creating a deceptively uniform culture labeled Scytho-Siberian…The Greek historian Herodotus faithfully detailed much of the life of the Scythians, a powerful, semi-nomadic people who lived north of the Black Sea between 800 B.C. and 100 B.C.”10

A female mummified in the burial vault must have been a prominent Scythian as she was buried with several horses and grave goods with gold ornamentation. An earlier excavation in the area had yielded “two skeletons with European features” who were buried with weapons and ten horses. These eastern Scythians were one of many clans on the steppes related to the Scythians of the Black Sea region. The fact that some of their burial mounds yield skeletons “with European features”11 will become increasingly important later in this chapter and in the next book in this series.

The Scythians were frequently called the “Saka,” or “Sacae.” The Encyclopedia Britannica states that the terms:
“ Saka [ Sacae] and Scyths…were regarded as synonymous.”12 (Emphasis added)

The Greek story of Xenophon mentions the “Sacians” of Asia had “suffered very severely” at the hands of the Assyrians,13 and a Roman writer, Pliny, stated the Scythians were “descended from slaves.”14 These accounts can only describe the Israelites: they bore the name of “Isaac” (“Sac”-ians), the Israelites truly were descended from a race of slaves (freed from Egypt in the Exodus), and they had suffered the complete destruction of their old kingdom of Israel at the hands of Assyria.

Bible scholar and historian Steven M. Collins teaches on the Lost Empires of Israel. This speech was given in Oct., 2009 to a live audience in Prescott, AZ. The speech documents the various migrations of the ten tribes of Israel after they went into exile as well as the new empires and kingdoms they founded in Carthage, Scythia and other locations. This speech details the main points in his book, Israel’s Lost Empires, and should build the faith of all who listen to it because you can see God’s faithfulness in fulfilling His promises to Israel. Here’s another video dealing with America as one of the Lost Tribes: https://youtu.be/exoaLYJ9YxU

Here’s a link to his books on this subject: https://stevenmcollins.com/store/